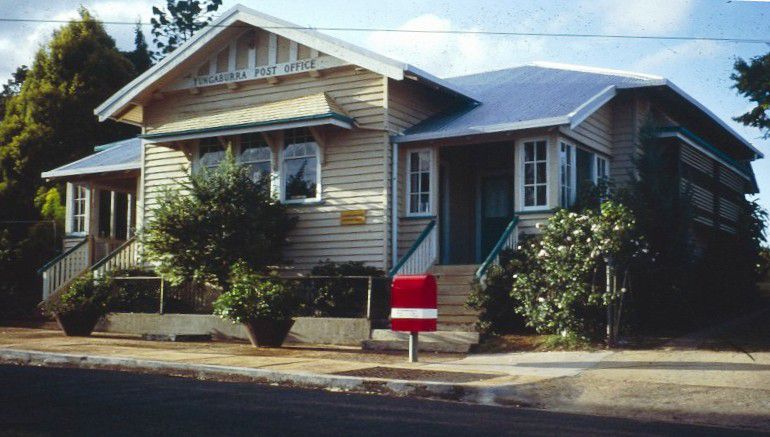 The post office is a timber building constructed in 1926 to a standard design. The adjoining block has a timber postal residence set back from the road. The earliest post office service at Yungaburra had been from the railway station.

The first Europeans on the Atherton Tablelands were engaged in timbergetting and mining, but the rich soil and cool climate were thought particularly suitable for the development of agriculture. In 1885 a Village Settlement scheme was introduced which offered settlers 40-acre farm blocks with home sites clustered as a village. Around this time a railway from the port of Cairns to the Tableland was begun, although it took far longer to reach its objective than originally envisaged. In 1888 a village settlement was laid out at Allumbah Pocket, later to become Yungaburra. The first farms at Allumbah were taken up in 1891, though the scheme proved unsuccessful. The railway reached Mareeba in 1895 and Atherton in 1903, greatly improving access to the area. Following new Land Acts in the early 1900s to encourage closer settlement that had more practical requirements, more people took up land around Allumbah.

The land on which the post office was later built was part of an Agricultural Farm selected by George O’Donnell in 1899. In 1900 the land was sold to George Wedderburn and subdivided into numerous small blocks in 1910. Six acres were acquired by the Railway Commissioner and the position of the new railway station, which opened in 1910, caused a geographic shift in focus from the original settlement, which was located further north west. Buildings were constructed or relocated near the railway and Allumbah was renamed Yungaburra to avoid confusion with another similarly named town. A period of rapid development began with the construction of a sawmill, a hotel and a number of shops and houses near the railway station. In 1911, Eacham Shire was formed.

Robina Heale purchased lots 19 and 20 in 1912. She does not appear to have lived in Yungaburra and it is not known if she constructed any buildings on the land.

The first postal services were conducted from the railway station, a common arrangement where mail travelled by rail and there was no post office. From 1924, a postmaster, L. Craven, is listed in the Post Office Directory for Yungaburra and served in this capacity for several years. The Gillies Highway between Yungaburra and Gordonvale was opened on 26 June 1926, providing the first trafficable road to the Tablelands. The road link made Yungaburra a gateway to the natural attractions of the Tablelands and created a second period of development in the town due to the blossoming tourist trade to the nearby lakes. Probably in response to this increased demand, the Commonwealth of Australia purchased both blocks of land in August 1926 and constructed a post office building on lot 19. It is not known whether or not the building used as a post office residence was already there or was built concurrently.

The Interwar period was an active period for the construction of post offices, and 26 buildings of this standard porch and gable design were constructed in Queensland country towns between 1923 and 1939. This type of post office building contained no accommodation for postal officers, quarters being in a separate building, although a domestic scale was maintained. Materials introduced in this style included concrete stumps and shingles on sunhoods, both of which can be seen at Yungaburra. The post office had several staff members and a telephone exchange. Many tourists visiting Yungaburra and staying at the nearby hotel would have used the post office. During World War II many troops were stationed on the Tablelands and visited Yungaburra for recreational purposes. A Mr T L Bytie was postmaster throughout the war years.

In 1974, with changes in Post Office operations, the property passed into private hands, although it remains in use as a post office and has belonged to the current owner since 1979.  Used with permission from the Queensland Heritage Website.