A Little Bit of History:
The idea of forming a Bowls Club was discussed in the year 1947, and the Yungaburra Bowls Club’s official opening was in 1948. The original clubhouse was built by voluntary labor after the majority of the work on the green was completed. 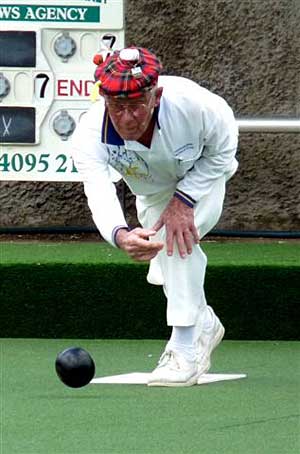 As work progressed, other people joined the club and helped with the labor. The original toilets were outside loos which caused many a headache to the committee members and patrons until the last clubhouse extension was completed. Before the whole area was properly fenced, the green was occasionally visited by cows from the adjacent Mather’s dairy farm whenever somebody neglected to tie up the fence after it was opened for the soil truck.

Club members, both men and ladies, conducted fund raising. Many men gave money as debentures on the understanding they were not repayable. A Queen’s Competition was organized with other towns participating. Yungaburra Bowls Club entrant, Joan Gilson (then receptionist at the Lake Eacham Hotel), having raised the most money, won the competition. Dances were held, mostly at the Kulara Hall. A concert was held in the Tivoli Picture Theatre Hall, which is now known as the Yungaburra Community Hall. Some players from other clubs, mainly Malanda, and workers from Tinaroo Dam (which was being built) helped and showed Yungaburra bowlers how to play the game.

The original blue couch green was replaced by the tif-dwarf green and was officially opened by Mr Roy Armstron, MLA, on Sunday 22nd January, 1978. In 2008, a new synthetic green was laid. Mr Harry Williams donated the land for our club and today a descendent,  Mr Peter Williams of Williams Lodge, Yungaburra , is our Club’s Patron. 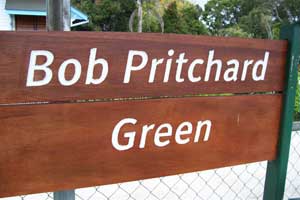 The Green was named after Bob Pritchard some years ago. Bob has been a member for over 50 years and has held many positions within the club. He loves his bowls and the club. The Green is named “Bob Pritchard Green”. Bob is the Bar Manager at the present time.

The Yungaburra Bowls Club has had many changes over the years and bowlers have come and gone; but it’s comforting to know that some things haven’t changed – spectators still gather at the front fence – a warm welcome awaits visitors and locas alike. The beer is cold, the meals top quality – and above all – we still share and enjoy the fun and friendship of the game. 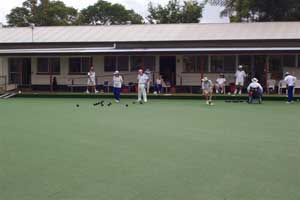 We play bowls socially on Wednesday, Friday and Saturday. Visitors from other clubs are very welcome. Yungaburra Club prefer you to wear bowls clothes, but it’s not necessary. We do ask that yo wear flat sole shoes on the green.

Friday is a mixed pairs game. It is self-selected and names are to be put on the sheet outside the club by Wednesday evening of that week. The game starts at 1pm.

On the 1st and 3rd  Saturday of each month, we have a mixed self-selected 3’s game which is run by the men. There is a book in the club for names. Club competitions are mostly held on Wednesday and Sunday mornings. 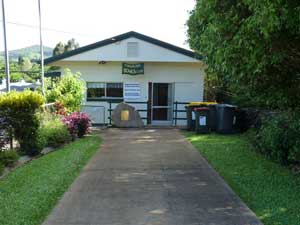 How To Start:
A couple of our members are coaches and so new players are always welcome. If you contact the club a lesson can be arranged. After people have a few lessons, they come along for a social game and if they are hooked; then they are asked to fill out a membership form and have it approved by our Committee of Management. 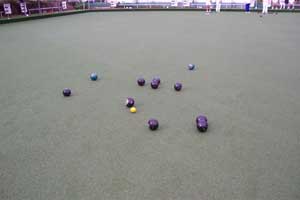 Yes, Yungaburra Bowls Club has very good disability facilities. We have a ramp into the clubroom and portable ramps that are used for wheelchairs to get onto the green. We have a male member with MS, who is a bowler, so he is very well catered for. We also have a disability toilet, which has been a great asset to the club.

Lawn Bowls is fun, skillful and challenging. We often say – “The company is great, we have fun, we get some exercise, we love our bowls, but the best of all no matter how you play on the day; you get smoko.”

We are a small by very friendly club and welcome all visitors if you are a player or not.
Come along to watch a game. Many people have done so and take many photos. You are welcome to come in and have a drink from the bar. There is a visitor’s book just inside the door. We are so lucky that the club is in such a beautiful location, looking out onto the countryside surrounding the wonderfully beautiful village of Yungaburra.

See you in Yungaburra!